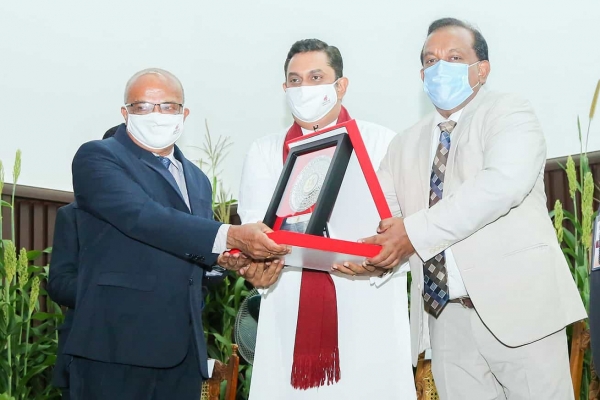 On 9 th October Of 1951 a bless of mother Give birth to the beautiful boy who received his primary education from Welivita primary school, and later completed his secondary and tertiary
education from the Central college Nugewela.

In 1988 he received his post graduate MPhil degree from prestigious University of west Verginiya, USA and the post graduate Institute of Agriculture, Peradeniya.

Thereafter he worked in different capacities in the Department of Agriculture as Assistant director of Agriculture at Matale district and Hasalaka Inter provincial area, In 1994 he was appointed as the Deputy Director - Technology Transfer, at Field Crop Research and Development Institute, Mahailluppallama, Then he became the first Head and later Deputy Director of the Agro Enterprises Development and Information Service, (AgEDIS) in 1997. He pioneered in establishing the Agro Enterprises Development and Information Service, mainly to promote business agriculture in the country.

Then in 2008 this gentleman entered to the directorate of the Department of Agriculture as the Director of the seed and planting material development center.

During his illustrious carrier, he was instrumental in Introducing Crop diversification program to Mahaweli System H. which paved was to increase chili cultivation extent to over 10,000 hectare in Yala 1986.

We are still enjoining his initiatives on maize cultivation in this country. He was the crop leader of maize and the convener of the Presidential task Force appointed under the leadership of Hon. Basil Rajapaksa on maize development. He took initiatives to introduced maize to low country dry zone paddy field then to paddy as well as other lands in wet zone. With his initiatives, as the Director of the SPMDC he could run all DOA seed farms as a profitable venture for the first time in history in 2009.

He Planned the Production Program of “Api Wavamu Rata Nagamu” in 2008 while working in the ministry on part time basis covering duties of the Director Development under the guidance of the minister of agriculture.

During the service carrier, he provided the leadership to develop linkages and obtain technologies to our mother land with and from international agencies such as FAO, UNDP/CGPRT center, 2KR japans Grant, JICA, and UNDP World Food Programme.

After his retirement, He provided his services to two major projects namely the World Bank funded, Second community development project, under the ministry of Economic Development as the Consultant Agriculture and as the National Expert of the UN /FAO, Development of Strategic Plan for Agriculture and Rural Statistics Project. A Team Leader of a consultancy firm to develop agriculture development plans for minor tanks of North Central Province.

Even at present, he works as a member of the Advisory Committee of the KOPIA Sri Lanka Center. He is the present President of the professional organization Sri Lanka Institute of Agriculture (SLIAg).

He was awarded the best agriculturist award of the ASDA 2003 and the best research paper presenter of the social science of the Congress of the Post Graduate Institute 1992.

We gratefully acknowledge his exemplary service rendered to the agricultural development of the country.