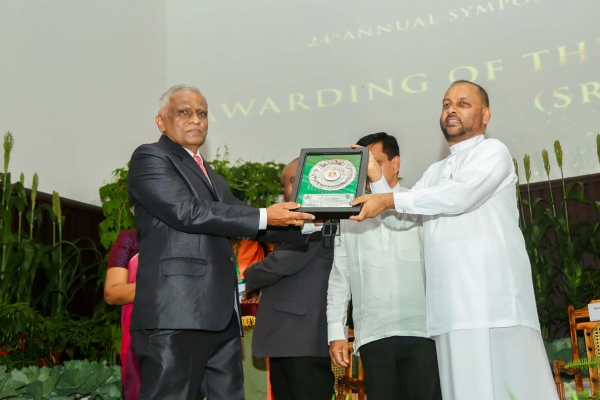 Mr. Shantha Siri Emitiyagoda comes from a rural farming family in a remote village named Panamure in the Ratnapura district. He was born on 02nd June 1953 in Panamure of Rathnapura district obtained primary education from Kahawatha maha Vidyalaya and attended Pelmadulla Gankanda Central College for Secondary education and Vidyaratne College in Horana for his secondary education. Having obtained his BSc in Agriculture from the University of Peradeniya in 1974/78, he managed to be blessed with a Master of Education in Agriculture Extension in 1987 from world recognized institution, the University of Illinois, United States of America.

He Joined, the Department of Agriculture in 1980 as an Agriculture officer and rendered his service in Rathnapura and Ampara districts. He was promoted to Assistant Director of Agriculture (Extension) and he worked from 1984 to 1986 in the Ampara District.

After his long tenure as Agricultural Extensionist at the field level, he was appointed to Rice Research &amp; Development Institute, Batalagoda, to look after the developmental and extension activities of rice production in Sri Lanka. Based on his capability and seniority, he was later appointed as the Additional Secretary (Agricultural Development) of the Ministry of Agriculture where he was extensively involved in agricultural policy matters.

During his long-lasting service, he rendered his service in various capacities including as a member of a number of Task forces, Rice crop leader, and head of Api Wawamu Rata Nagamu program of the DOA. It is interesting to note here in this ASDA 2022 that this capable personality had served as the Chairperson of the ASDA 2006.

He pioneered in Yaya Approach for increasing rice production and productivity through which Sri Lanka geared towards self-sufficiency in rice. Further, he made significant contributions promoting balanced fertilizer application and later IPNS (Integrated Plant Nutrition approach) for soil fertility enhancement. He is also responsible for promoting local seed production activities with the
private sector. In spite of his major role in agricultural extension, he authored a number of publications, articles, books, chapters, and a special book on the Guideline for Climate Smart Agriculture.

After retiring from a successful career in the government sector, he has served in the private sector seed company and was involved in a number of short-term consultancies in UNDP, EU, FAO, KOPIA, and WB-funded projects.

SriLanKoRAA is a milestone in his career as he is one of the important persons in establishing the Sri Lanka Korea Alumni Association in 2005 and served as the General Secretary from its inception to date.