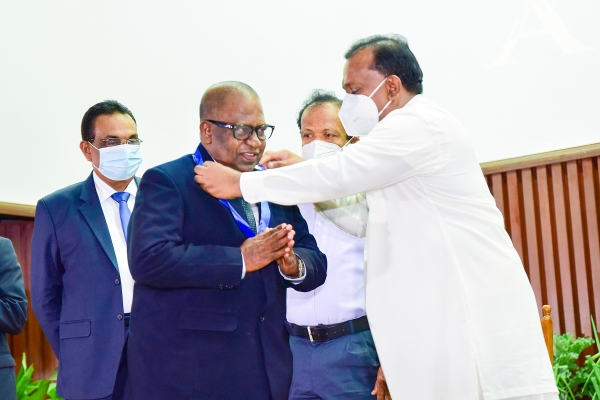 The Best Scientist of the Year 2020

Dr. S.J. Arasakesary, Being the youngest in his family, He started his primary education at Manipai Hindu collage, Jafna.  He qualified for the university entrance from Vaddukkoddai College, Jaffna. He was graduated from University of Peradeniya with B.Sc. Agriculture and obtained his Master’s Degree from Punjab Agriculture University in 2002. Later He obtained his PhD in plant breeding and genetics from Tamilnadu Agricultural University, Coimbatore in 2013.

This very enthusiastic, and academically sound officer started his research career from Field crops Research and Development Institute, Mahailluppallama in 1993 and then continued her research activates on Plant Breeding from the Agriculture Research Station, Thirunelvely. During his tenure he was able to contribute for the development of more than 3 chilli varieties and he has identified several types’ of mango varieties and one cluster onion variety.

In 2008 he was promoted as the Deputy Director (Research) to develop Regional Agriculture Research and Development Centre, Kilinochchi from its ruins to present state as the fully pledge agricultural Research Centre in the northern province. As a plant breeder, he has developed new cluster onion and OFC verities which are to be released by the varietal release committee of the Department of Agriculture for general cultivation.

Currently, he serves in number of national research grants and research paper evaluating comities. Meanwhile, there are more than 35 research publications for his credits on the subject of plant breeding.

During his tenure at the Department of Agriculture, He has been conferred with several awards for scientific excellence including, Presidential award for “Best Contributor in the Agriculture Sector - 2018”